Cris Pereira hates starring in a cautionary tale. Alas, her recent heartbreak relegates her to this unbecoming fate. The only good thing about being dumped a foot from the altar is the newest layer to her punchy sarcasm. All she wants is a do-over, but this is not your average fairy tale, and wishes don't come true in the real world. One Sunday afternoon, she meets a movie star. Tom Abramson is intelligent, charming, and impetuous. In other words, he plays the role a bit too well. She isn’t falling for it. She knows better. All British men are not descendants of Fitzwilliam Darcy, and movie stars are genetic mutations gone awry: X-Men with statistical disadvantages and emotional handicaps. Keep your knight in shining armor. A modern girl can rescue herself, thank you very much. After all, dreams are for the foolhardy, nightmares are just a part of life, and . . . this is not your average fairy tale.
Synopsis taken from goodreads.
Title: Fanfare
Author: Renee Ahdieh
Genre: Adult Fiction, Romance
Publisher: Revolution Publishing
Publication Date: May 31, 2011
Format: E-ARC
Source: Received from publicist. Many thanks goes to Jennifer for sending me a copy of this book for review. I received this book free of charge in exchange for an honest review.
Look for it: Amazon, Book Depository
My rating: 4/5
Cris is still reeling from the after-effects of being jilted by her ex-fiance, so she isn't looking to jump into a relationship any time soon. She is more than a little aggravated that she has to stand in line for half a day with her cousins just so they can get a picture or two and an autograph from one of their celebrity crushes. When said celebrity strikes up a conversation with her, she doesn't think she'll get another shot at happiness, especially with someone who is in the limelight around the clock. Happily ever afters only ever happen in the movies, not in real life, right?
Cris is a spunky, snarky, and humorous character. Her indecision and fears of jumping into a committed relationshop are real. Having been hurt before, she does not want to repeat the process. She was a fun character and I could easily relate to her. She has a great group of close friends, and I found that I was able to connect to them easily as well. They had Cris' best interests at heart and they stood by her as she got back onto her feet and stepped back into the dating world.
Tom is also a complex character and I really liked how he was unafraid to let Cris know what he was feeling. At odds with his celebrity status, he just wants to have a friend around, someone he can talk to. He befriends Cris and attempts to gain her trust as he opens up to her, hoping that she will in turn open up with him and be the friend he so desperately needs.
With a refreshing and straightforward writing style, Ahdieh is a force to be reckoned with. Conscientious characters, and a relationship of improbable proportions make this read a fascinating one. You'll want to be transported back into Cris' world to see what else she and Tom have up their sleeves.
All in all, a fantastic debut. One that will leave romance lovers craving more. This is solely a romance read, but the tension is kept high as we follow Cris as she traipses through the minefield of emotions that come with moving on from a past relationship and the expectations of a high-profile relationship. 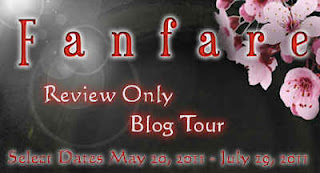 Great review! This sounds so good. Thanks for sharing:)

thank you so much for your review, corrine! :-)