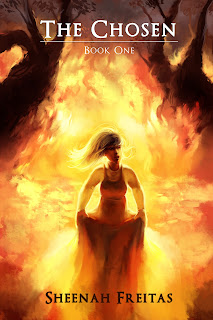 Kaia's entire life has erupted in flames after an assassin appears and burns her village down. She's rescued by a god from another planet who requests her help because she's the descendant of their last savior. Together with Reeze -- the only other survivor from her village and her appointed guardian -- they set off on a quest to find the treasures of the gods in hopes of preventing a dire prophesy. Kaia and Reeze quickly meet the Tueors, a group of people many thought extinct, who are searching specifically for Kaia. Their intention: to protect the truth. As Kaia discovers more about the truth and her family's past, she also learns of the Tueors' bloody secret. Will Kaia be the savior the gods have been waiting for? Or will she let the prophesy come true?
Synopsis taken from goodreads.
Title: The Chosen
Author: Sheenah Freitas
Genre: Young Adult, Fantasy
Publisher: Red Willow Digital Publishing
Publication Date: July/August 2011 (re-issued)
Format: Unedited ARC
Source: Received from author as part of the Teen Book Scene blog tour. Many thanks goes to Sheenah Freitas for sending me a copy of her book for review. I received this book free of charge in exchange for an honest review.
Tour: Teen Book Scene blog tour. You can follow along with the tour here, or by clicking through the banner located below the review.
Look for it: Amazon
My rating: 3/5

Kaia is out picking blackberries and enjoying the beautiful day. When she returns home though, her world is shattered completely. With the destruction of her village, and the realization that nothing will be the same, she finds out that she is the last descendant of her world's previous saviour. Now, she is on a quest to collect the treasures of the gods in an effort to stop the prophecy from being fulfilled. However, she doesn't realize that all is not as it seems, and she may actually unleash the prophecy, instead of preventing it from happening.
Kaia is an interesting character. She's strong, yet easily frightened, and constantly is questioning her destiny and those around her. Her fellow travelers are also interesting in their own ways. Reeze is an intriguing character, especially when faced with the decisions he has to make. Both Derek and Catrina add flair and adventure to the group as they round out Kaia's entourage. Seeing the sparks and witticisms fly between them is enticing.
I found the read was a bit rough at times though. This is an unedited arc, but there were quite a few sentence phrasings that were odd. With a bit of tightening up this could be a fantastic read. The ideology behind a world with different circles of gods was interesting. How each related to the other, and how they needed balance to function efficiently was neat. Especially once Kaia's thrown into the mix to change the balance. Whether she does or not, is yet to be determined. Another aspect that I found could have been extrapolated on is the fact that as a sister world to Earth the world-building wasn't completely fantastical. Sure there were beings from myth, but then there were also modern appliances like televisions, and conveniences such as pizza delivery. It just didn't seem to mesh well with the gods and goddesses theme that the book is built around.
All in all, a good read. The Chosen is an intriguing read, and I'll be interested to see what happens next. This edition had some rough spots due to sentence phrasing and structure, but if the reader perseveres they will be rewarded with an engaging and descriptive read. I'm definitely wondering what is set to happen next in the follow-up to The Chosen.