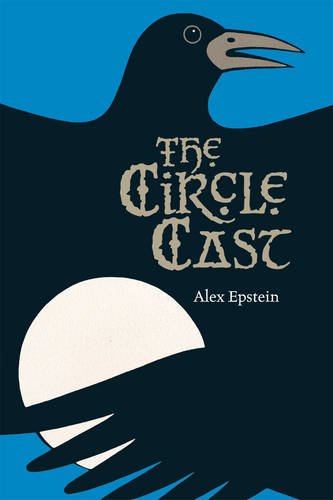 How did an exiled girl become the most powerful witch in legend?
Britain, 480 AD. Saxon barbarians are invading, pushing the civilized British out of their own island. Morgan is the daughter of the governor of Cornwall. But when her father is murdered and her mother taken as the King's new wife, she has to flee to Ireland to avoid being murdered herself.
But Ireland is no refuge. She's captured in a slave raid and sold to a village witch. As Morgan comes of age, she discovers her own immense magical powers. She falls in love with a young Irish chieftain, and makes him powerful.
But will her drive for revenge destroy her one chance for love and happiness?
Synopsis taken from goodreads.
Title: The Circle Cast
Author: Alex Epstein
Genre: Young Adult, Historical Fantasy
Publisher: Tradewind Books
Publication Date: January 4, 2011
Format: E-book
Source: Received from author courtesy of Teen Book Scene. Many thanks goes to Alex Epstein and Teen Book Scene for sending me a copy of this book for review. I received a copy of this book free of charge in exchange for an honest review.
Blog Tour: Teen Book Scene. You can follow along with the tour here, or by clicking through the banner located below the review.
Look for it: Amazon
My rating: 4/5

Morgan is left bereft after her father is murdered by the High King. With Uter's sights set on bedding Morgan's mother, she is left with only one option; to run as fast and as far away from Din Tagell as she can, lest she become another casualty of Uter's reign. She flees to Ireland, vowing to return to wreak vengeance on Uter for taking both her father and mother away from her. Though she is taken captive, enslaved, and regains her freedom, her plan for vengeance is never far from her mind.
The Circle Cast is a re-imagining of the lost years of Morgan Le Fay. Epstein brings to life a completely plausible and highly inventive way of life for the lost years of Morgan Le Fay. With the assumed name of Morgan, Anna leaves her mother as they realize that Uter would kill any children not his own. With Anna, now Morgan, on the run, a life living in the wilds of Ireland is more than likely to result in her enslavement as she explores her connection with the earth.
The Circle Cast is set in such a time where Christianity is deemed a strange and foreign concept, and druids proclaimed that their gods were real and could help them with magic whereas the Christian God could not. With Christians spreading the word to the clans throughout Ireland, it was interesting to see how people reacted to them and the new God that they worshipped. Many rebelled against this new God and refused to believe in a God so different from their own gods. How Epstein integrates Christianity into Morgan's life and how she responds, or doesn't respond to it, really brings to life the conflict of the times, therein making Morgan's life at the time all the more uncertain. Her conflicted state of being wars with her connection to the earth and brings more realism to her struggles. She very much wants to avenge her father and mother, and finds the concept of grace and forgiveness foreign.
All in all, a thoroughly and imaginatively described world in which magic comes to life as it is channeled through Morgan, as she calls on her connection to the earth to help her in her time of need. History, and the early church history being spread across Ireland makes this a rich and informative read as well. We get to see a side of Morgan that isn't necessarily seen as she comes to terms with her identity and future. As an avid history fan, I absolutely loved this rendition of Morgan's lost years and am curious to see how Epstein would continue her story.