Sara Curran-Ross Guest Posts about Knight of Swords, and Her Inspiration.

INSPIRED BY THE TAROT: KNIGHT OF SWORDS
I had a lot of fun writing Knight of Swords. I had wanted to write a vampire story for a long time but after many false starts I decided that I didn’t have the confidence to finish one. It wasn’t until I began looking into tarot cards that I found the inspiration for Knight of Swords. 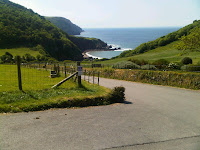 As the title suggests, my novel is based on the tarot card, Knight of Swords. I’d had a couple of tarot card readings and this one kept coming up in the spread. There were also a few others that persisted in appearing, usually swords, which meant I was facing some kind of challenge in my life. They all began to play upon my writer’s imagination. After all, there are many characters and stories in the tarot. My emotions and quite often frustrations at the continued manifestation of these cards in my readings began to form into a story, giving me the ability to express the meanings I have personally attached to them. If you read Knight of Swords you will find many scenes and characters that resemble the tarot cards.
When I write I see my story visually. I often think of it as a movie that gradually develops providing me with scenes that I will eventually link together in a coherent piece of writing. Knight of Swords and my main character Nathan were very vivid in my mind. At times I felt as though I was inside my movie watching and recording all that transpired. I felt the snow on my face and loudly heard the clash of swords around me in the battles and duels Nathan fought to save his Queen of Swords. 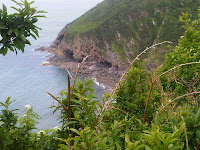 I was still in the middle of writing my book when I went on holiday with family to a cottage in Exmoor in the UK. The whole holiday and picturesque area with its rolling hills, jagged coastline, sea caves and quaint old nineteenth century villages brought more scenes for my movie thick and fast. The images became intense and more vivid. One early morning my husband and I decided to walk the dog at Saunton Sands. The moment I stepped onto the beach I was treated to a vision of a large group of sleek black horses charging across the sand out of the blue haze towards me. All of their swords were drawn and Nathan was at the front leading his men into battle. I could almost feel the rush of air as they passed by me and faded into the distance.
Another huge inspiration for Knight of Swords was the music I listened to when I wrote. I can’t seem to write without music. It always helps to conjure up images, scenes and more importantly a character’s feelings and emotions. I couldn’t stop playing 30 Seconds to Mars and their ‘This Is War’ album. In particular, my favourite tracks, ‘Hurricane’ and ‘Stranger in a Strange Land.’ It was ‘Hurricane’ that helped me write down the scene with the charging horses. Their music and words just seemed to fit Nathan’s emotional temperament and the mood I wanted to create in Knight of Swords.
Quirky stuff, I know, but writers end up doing all kinds of strange things to stimulate the muse. Looking back over the story I can’t help wondering if it isn’t a personal tarot reading for myself, and not just the influence of watching too many dodgy black and white swashbuckling movies with Errol Flynn in them as a child. I recently went to see a very good tarot practitioner who told me I was writing from a very deep place and that it was no wonder I felt a strong connection with my characters, I had known them all before in past lives!!!
Scary! But there are stranger things in heaven and earth…. Let’s just hope they weren’t vampires as well.
Very interesting, Sara! Love the gorgeous and picturesque setting that brought KNIGHT OF SWORDS to life! Thank you so much for being here today!
For more information on Sara, you can visit her at her website, or her blog. You can also view her previous guest post on Lost For Words here.
----------------

Lord Nathan Valancourt is stinking rich, a darling of London's social set in 1893 and a notorious womanizer. He had never believed in the supernatural but when a vampire killer masquerading as a clergyman begins haunting his dreams and forcing him to endure visions of the murder of his previous female conquests, Nathan determines to amend his frivolous ways.
When the killer turns his attention to Nathan's beautiful ward, Juliet, Nathan is anxious to protect her. As they battle the monster, Nathan and Juliet gradually realise that they share a psychic connection. This close bond triggers the discovery of their true heritage as descendents of human-vampire unions and leads to the gradual revealing of powers beyond their imagination that offer them hope of victory.
Synopsis taken from goodreads.
Posted by Corrine at 3:30 AM