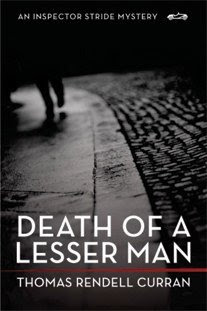 Tom has graciously provided Lost For Words with a signed, finished copy of Death of a Lesser Man.
Thank you Tom and Taryn for this amazing giveaway!
Please fill out THIS FORM to enter.
Bonus entries are available for those who comment.
This giveaway is international and will end May 19, 2011.
Thank you!
Posted by Corrine at 12:51 PM

Thanks for the spotlight. I never knew a lot about Newfounland's history.

I would love to read a Canadian mystery. A great setting and storyline.

This sounds like a compelling read... =)
Your interview questions were really direct and detailed, good job!! Thanks for the read.

Thanks for hosting this giveaway!!

Wow, this sounds like an uber good book...history, action, mystery..all of it!
Oh, and I loved reading your interview. ^_^
mikabirdofcats AT gmail DOT com