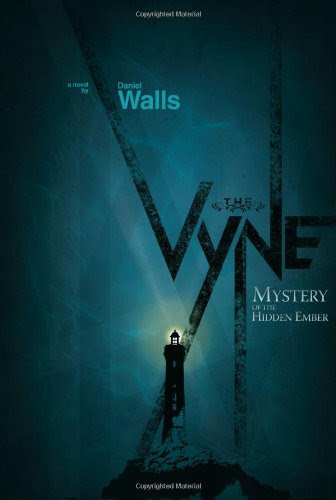 For as long as he can remember, Asher has possessed unexplainable abilities, which his widowed father has forced him to keep hidden. But when an elusive girl named Scar enters his village, Asher's life is forever transformed.
Bound by despair, the teens plot to run away. However, when a mystical medallion finds its way into Asher's hands, they soon learn that running is not an option, it's imperative. Asher is thrust into the pursuit of a legendary treasure, believed to possess the power to save the world from the prophesied apocalypse. And the key to unlocking this power lies within the secret of his curse.
While hunted by dark forces, Asher realizes that Scar has secrets of her own; she is not the girl he thought she was. Time is running out as he struggles to find the strength to let go of his feelings and summon the courage to embrace his destiny.
A chilling, heart-wrenching tale of colliding worlds and forbidden love, The Vyne reinvents steampunk-fantasy for a whole new generation.
(Synopsis taken from Amazon.)
Title: The Vyne: Mystery of the Hidden Ember
Author: Daniel Walls
Genre: Young Adult, Adventure, Steampunk, Fantasy
Publisher: Two Harbors Press
Publication Date: January 3, 2011
Format: Softcover
Source: Received from Teen Book Scene as a traveling blog tour book. Many thanks goes to Jessica from Teen Book Scene for sending me a copy of this book for review through the Teen Book Scene ARC tour system. I received this book free of charge in exchange for an honest review. You can follow along with the tour here.
Look for it: Amazon, Book Depository.
My rating: 4/5

Ash thinks that he is never going to get out of his town and that he'll work for his aggressive and somewhat abusive father for a long time to come. When he rescues a girl, Scar, from those who would take her captive, he doesn't realize that she may be the one person to propel him away from the town he thought he'd stay in forever. With Scar's appearance, Ash's destiny becomes more clear even as it becomes more obscure. When a medallion of ancient and legendary power falls into his hands, he realizes that he might not be who he thought he was. He'll have to stand up to the forces of evil to fulfill the prophecy that the medallion brings with it, all the while fighting to survive the evil encroaching its way across the land.
Within the first few pages of the book I found myself immersed in the storyline especially when we first start reading about Scar and her dangerous ploy at retrieving a valuable object from one of the most daring and corrupt pirates to roam the high seas. Scar adds an element of uncertainty to the novel as we are left to wonder who she is working for. With Scar's identity in question, and most of the port decimated, Ash is left to defend her to his colleagues and friends. He doesn't know who or what she is, though he can't help but feel drawn to her. He is coming to realize that he might not be as normal as he thinks he is, and when he finally gets some answers he realizes that there might be more to his past than he originally thought. This in turn sets him up to realize that his skills will be needed if they are to survive the war threatening to rip apart the world.
Though he and Scar are written beautifully, I found that the romantic element between the two fell a little flat. I found the action scenes more believable, and didn't find there was any lead up to anything that Ash did concerning his feelings towards Scar, especially when he kissed her. It seemed to come out of the blue though this aspect didn't detract from the read too much.
Another character that I thought was illustrated and fleshed out brilliantly was Xavier. I couldn't help feeling both sad and happy for him. Especially since he managed to play both sides of the field. I think many readers will have a love/hate relationship with him as he shows the dual sides to his personality, and the reader will have to decide what side Xavier is actually playing.
All in all, a great debut with good bones. With a main character who needs to step up to fulfill his destiny, and a diabolical villain, readers will be waiting with bated breath to find out who will prove the stronger candidate. The side characters are just as memorable, and I can't wait to see what's in store next for Ash. Fans of fantasy, and steampunk will like the steampunk elements mentioned in the book. The action doesn't let up in this one, and I think a lot of teens will enjoy this one for that reason, as well as for all of the characters that they will become acquainted with in this brilliantly envisioned world.
Posted by Corrine at 10:00 AM

This is one of those books that I've been dying to read, so I'm glad to hear you thought it was a solid read. Great review! :)