Shawn Thomas Odyssey is here today with a guest post courtesy of the Teen Book Scene blog tour for his new release, The Wizard of Dark Street. Thank you for being here Shawn! You can follow along with the tour here, or by clicking through the banner. Enjoy!

Since I am currently out and about on a bookstore tour, promoting my magical/mystery novel The Wizard Of Dark Street, and having a blast making the rounds on a splendid blog tour set up by the fantastic crew at Teen Book Scene, I thought it might be interesting to talk a bit about some of my favorite TV shows.
What, huh? You don’t want to talk about books? This is a book blog after all! Yes, I know, and I do love books more than just about any form of entertainment. But it would be careless of me to neglect to mention some of my most memorable moments in front of what my grandmother so affectionately called the “boob tube”.
Veronica Mars: Short lived on the small screen, true, but may it live long and prosper in my heart. A teen girl gumshoe who’s witty, smart, and cute as a button? Who could resist? The cast of characters was simply to fantastic for words, and the writing sensational. If only I had been so cool in high school. 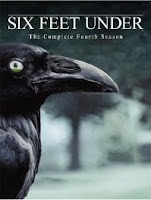 Six Feet Under: One of the best family dramas ever created, in my opinion. The perfect balance of dark humor and emotional rollercoaster. With a new death each week, the show gave me a sense of appreciation for all that I have, and a reminder that life is to be lived right now, and not in the future. Oh, and the last episode of season five? Hands down the best TV show finale ever made. Simply took my breath away.
The Sopranos: Never knew it was possible to relate so much with Mafiosos. But that, of course, was the brilliance of the show, and to me is what great storytelling is all about: showing us the humanity behind the mask. Several other HBO shows that did a brilliant job of this would be The Wire, Roam, and Deadwood (and I don’t mention this last one simply because I composed a lot of the music for the show, but because it, like the Sopranos, had this mind-boggling ability to transform bad guys into, if not good guys, then at least someone we could understand and care for…no small task with a group of thieves and sociopaths).
Dexter: I really did not expect to like this one, but I became a real fan after the first few episodes. How is it possible that a show could survive when its main character is a serial killer? I’ll tell you how. The secret is in the music. Now don’t get me wrong. The writing is top notch, and the acting spot on and believable. The interpersonal relationships really make the show human, even when Dexter is struggling with his own humanity on the inside. But the real magic of the show is the music. It’s the music that turns blood baths in to light-hearted romps into the world of vigilantism at its most extreme. Everybody wants Dexter as their brother.
Bones: This one I started watching simply because the guy who played Angel was on it…David Boreanaz. But it was the fantastic cast of characters that truly sold me on the show. (Is it obvious yet that I’m a character person?) But let’s not forget the beautifully ludicrous scientific plots. In my opinion, the more outrageous and over the top, the better, and the scientific team’s ability to deduce the location of a killer’s birthplace by the discovery of a dust mote on an eyelash is true entertainment. Disbelief suspended? Check! I Love it. 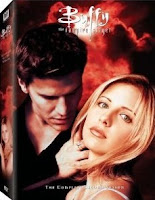 Buffy and Angel: These have to be two of my all time favorites. Buffy the Vampire Slayer took my breath away with its originality, humor, genius cast, and a truly stellar writing team that never failed to capture my imagination fully in the ever-expanding Buffyverse. For me, Buffy (the TV show) is the perfect B-movie times one-hundred. And Angel was right up there with it. Talk about characters that transformed. Just think of shy Willow Rosenberg becoming an all-powerful witch, or bumbling Wesley Wyndam-Pryce’s transformation into a seriously believable badass. Dear Mr. Whedon, please give us more, more more!
The Adventures of Sherlock Holmes: This 1980’s British (Granada Television) series is the quintessential Sherlock Holmes. And in this humble writer’s opinion, no other performer has ever managed to capture Holmes’ idiosyncrasies and quirky yet brilliant methods better than Jeremy Brett. His portrayal is nothing short of genius; each episode a masterpiece of suspense. Is it cheesy? Absolutely. Is it outrageous? With out a doubt. Are the mysteries baffling? Indubitably. Is it the perfect Sherlock Holmes? I believe the answer is elementary: YES, YES INDEED!
The Wizard of Dark Street is available in bookstores nationwide and online in both hardback and eBook formats.
Please visit: http://www.thewizardofdarkstreet.com
I have to say that many of the shows you have listed here are some of my favourites as well. My ultimate favourite would have to be Buffy though!
Thank you so much for being here today, Shawn! I can't wait to read The Wizard of Dark Street. It sounds awesome!
--------------

Oona Crate was born to be the Wizard's apprentice, but she has another destiny in mind.
Despite possessing the rare gift of Natural Magic, Oona wants to be a detective. Eager for a case, she is determined to prove that logic can be just as powerful as wizardry. But when someone attacks her uncle--the Wizard of Dark Street--Oona is forced to delve even deeper into the world of magic.
Full of odd characters, evil henchmen, and a street where nothing is normal, The Wizard of Dark Street will have you guessing until the very end.
Synopsis taken from goodreads.
Posted by Corrine at 5:00 AM