Author B.K. Bostick is here today with an interview and giveaway. Thank you for being here today, B.K.!

If you made the front page headline of a newspaper, what would you not want it to say?
Local author requires medical evacuation after binging on doughnuts at Krispy Kreme.
If you could describe yourself with one song, which song would it be and why?
The Eye of the Tiger- I listen to it whenever I go into writing mode (I imagine myself in lots of montages)
Before you are two doors. One opens up to Hogwarts, and the other to Narnia. Which one would you go through?
Definitely Hogwarts. I've always wanted to try a butterbeer.
Can you give us a description of Huber Hill and the Dead Man's Treasure in haiku?
Hidden long ago
Deep within the mountain side
The dead guard the gold
If you were a character in Huber Hill and the Dead Man's Treasure who would you be and why?
While not the main protagonist, Scott is probably my favorite character. If Huber is Frodo, Scott is Samwise. Plus, he says it like it is and doesn't hold back.
Thanks!!
Thank you for being here today, B.K. and answering my questions!


Check out the fundraiser that B.K. is doing for his neighbour Alyssa, at www.treasureforalyssa.com
--------- 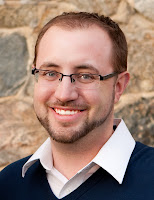 B.K. Bostick, author of Dead Man's Treasure, resides among the magnificent Rocky Mountains. In addition to writing, he has spent his career in education. He earned his Bachelor’s degree in Psychology from the University of Utah and his Masters in Psychology from Utah State University. He has worked as a teacher, after school program coordinator, junior high school counselor, and most recently as a teacher mentor for a University. He loves spending time with his lovely wife and two dogs. In his spare time, he enjoys eating cheetos and watching old episodes of the Twilight Zone.
---------

When his grandfather dies, Huber Hill is devastated---until he opens Grandpa Nick's mysterious box. An old gold coin and directions to a hidden Spanish treasure send him and his friends off on an mind-blowing adventure, but he's not the only one on the hunt. Filled with dangerous animals and cryptic puzzles, this book will have you on the edge of your seat until the last page.
Synopsis taken from goodreads.
---------
Giveaway
B.K. Bostick has graciously provided a bookmark and coin giveaway for those who like his page on facebook: www.facebook.com/bkbostickauthorpage.
Posted by Corrine at 4:00 AM

Thanks for using the time and effort to write something so interesting.