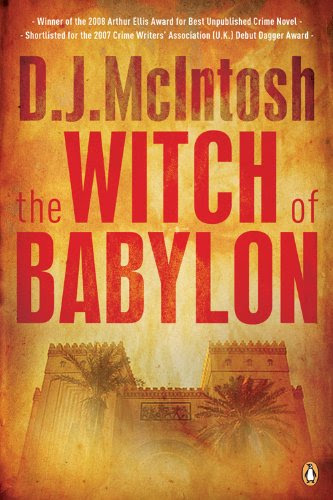 The Witch of Babylon features John Madison, a New York art dealer caught up in the aftermath of the looting of the Baghdad Museum. It includes an elaborate puzzle that must be solved in order to locate a missing biblical antiquity and a spectacular lost treasure, as well as alchemy, murder, and the Mesopotamian cult of Istar. Alternating between war-torn Baghdad and New York, with forays into ancient Mesopotamian culture, The Witch of Babylon takes readers deep inside the world of Assyriology and its little-known but profound significance for the modern world.
Synopsis taken from goodreads.
Title: The Witch of Babylon
Author: D.J. McIntosh
Genre: Adult Fiction, Historical, Religious Thriller, Suspense
Publisher: Penguin Canada
Publication Date: June 7, 2011
Format: ARC
Source: Received from publicist. Many thanks goes to Bronwyn from Penguin Canada for sending me a copy of this book for review. I received this book free of charge in exchange for an honest review.
Tour: Penguin Book Tour.
Look for it: Amazon, Penguin
My rating: 3.5/5

John Madison is still reeling from the death of his brother, Samuel, when suddenly, Hal, one of his longtime friends, is murdered. Madison is pulled into a terrifying game of historical and Biblical proportions when he realizes that Hal stole an artifact from his deceased brother, Samuel. When an arcane group comes after John for the artifact, he will have to track it down to save not only himself, but those around him. With danger lurking ever closer, he will have to solve the riddles left to him by Hal before he is pulled in too deep. What follows will unveil a complex yet famous myth hidden within the annals of history.
John is a complex character. He lives his life in shades of gray, but he is not all bad. He is quite knowledgeable about certain elements pertaining to art and archaeology, however when tasked with figuring out the riddles given to him by his deceased friend, he struggles. He reaches out to certain people and entrusts the riddles with them, but they still take a while to figure things out. I found that dragged for me.
However, the history used, and the amount of research that went into this book is phenomenal. I am an avid fan of anything historical and I love reading up on it. Though The Witch of Babylon does not necessarily have as staggering a reveal as The Da Vinci Code, it still has an excellent theological, and mythological premise. I was hooked when it first opened up and we started to get to the meat of the story. I loved reading about the history, as well as the action that follows as John races against time to save his life and the lives of those closest to him.
With complex characters, and an intricately woven plot, this is a fast-paced read. The mythological and theological ramifications just add to the story. Though The Witch of Babylon starts off slow, it ramps up speed as it keeps the reader invested in the outcome.
All in all, a thrilling race against time as John travels half-way across the world to find a hidden and stolen artifact. Those who enjoy religious thrillers, or thrillers in general are sure to enjoy The Witch of Babylon.
Guest Post
Bad Guys Volume Two
By D.J. McIntosh
The clear split between good and evil in many thrillers makes for heart-pounding suspense but is a world carved into clear lines of black and white, hero and villain, the most satisfying  kind of read? On another blog I argue that a “bad guy” (or lady as the case may be) can be one dimensional, that is without any apparent redeeming features or an explanation of their motives other than being driven by “pure evil”, provided the author makes that character fascinating to us and unique. And we like to be scared out of our shoes by a really bad apple and then see the hero deliver the coup d’etat in the end.
It takes a very talented writer to deliver a villain who may be entirely blackhearted but captures our imagination all the same. Often, though, “bad guys” are cartoonish because we’ve seen them so many times before. You could almost list them: the greedy developer, the serial killer who embodies “pure evil”, the mean dowager fiercely hiding a family secret. The constant portrayal of some of these stock-in-trade bad guys can actually do harm in the real world. In political thrillers for example, villains frequently come from Arabic countries and the heroes from the west. We read almost nothing that reflects the great cultural and intellectual heritage of the Middle East. Another common “bad guy” is the eco-terrorist – the over zealous animal rights activist or despot who stdardly acts in order to save the planet. These characatures cast a pall over all environmental activists.
I think this is why novels where the lines of black and white merge to grey stand out so well. In his superb novel, The Meaning of Night, Michael Cox gave us a masterful portrait of a protagonist who commits fearful acts but whom, we desperately with hope will survive. I believe Cox achieved this because the “bad guy” has himself been grieviously wronged and the author makes us vividly aware of the man’s emotional pain.
Ian Rankin does a brilliant job of turning one of his lead characters, an assassin, into a compelling figure we have compassion for by telling his story in the first person and the “good guy” police detective in third person. Rankin adds the final touch by giving his protagonist a life threatening illness that draws us onside.
So what do you think? Do you like your villains to be thoroughly bad or is a touch of humanity more to your liking?
Posted by Corrine at 11:23 PM

Well put, Dorothy. The shades of gray in a villain keep me on the uneasy edge of wondering 'would I be equally villainous in his shoes?'