Today, Julie Smith is here with a behind the scenes look at the making of Cursebusters! courtesy of the Teen Book Scene. Thank you for being here, Julie! You can follow along with the tour here, or by clicking through the banner. Enjoy!

A BEHIND THE SCENES LOOK AT THE MAKING OF CURSEBUSTERS!
The world is definitely coming to an end next year. Have you heard? Well, six years ago, I had, but I didn’t know everybody was going to make such a big deal about it. Back in 2005, when I started writing a YA book, then called BAD GIRL SCHOOL (now CURSEBUSTERS!), I wanted to use an ancient Mayan city as a setting and I knew that thing about the Mayan calendar stopping in 2012. Great idea, I thought, to have my protagonist time-travel back to a Mayan site and prevent the end of days.
But the first eighteen or so versions didn’t work out. I based the story on something that happened to someone close to me—a kid who ended up in a “school for troubled teens”, a place so strict you couldn’t even talk to the other kids. And where you were watched every second and there were walls to keep you from running away. How on earth was Reeno, my teen-age burglar protagonist, ever going to have an adventure under those conditions? Well, there was the time-travel thing. That was a perfect fit--you can do time-travel without going anywhere. (Well, except backwards or forwards.) But who was Reeno going to talk to? Enter the Alpha Beast (aka A.B.), her “handler” for the adventure, a telepathic….um…cat. See, a cat wouldn’t be noticed by anyone at the school, I reasoned. Kind of like a fly on the wall. I didn’t actually realize he was going to take over the book. All good ideas, right? Bad girl, time travel, talking cat. But there were more—Reeno’s mom was trying to kill her, for one thing. Aaargh. Too much, said a kind editor who wanted to publish the book. 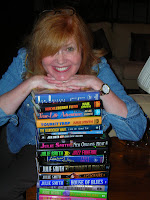 Multiple rewrites ensued! First I made Mom nice, but harassed because Grandma had Alzheimer’s and lived with the family, all of whom were pretty much full-time babysitters. That helped, but there was more.
The original beginning was harrowing: Reeno got kidnapped and dragged off to school by detectives hired for the job. But that didn’t fit with the humor. So I made the first part kind of slapstick—the burglary that goes wrong and lands the kid in Bad Girl School. That was better, but still, Reeno couldn’t talk, except in Group, which was basically a psychotherapy sharing kind of thing—very stiff and unnatural.
It still read kind of like two different books—one about the school and the other about the time-travel adventure. Said the kind editor. I was about to go back to the drawing board when she quit her job and moved back to the Midwest. Waaaah!
So I put the book away. Until one day I woke up and realized it was almost the end of the world! Or at least 2012. My agent suggested I run it by a new kid in the office, a young man named Cooper. Well, Cooper was chock full of great ideas, one of which was a conclusion I’d come to as well—I just had to relax that rule about talking! Reeno needed some real friends she could talk to. And maybe a boy friend.
Make them psychic, he said—that could be a lot of fun. Well, yeah. So I did.
And let’s have a curse, said Cooper. If she has to break the curse on her family, she’s got a lot more reason to do the stupid cat’s bidding. Great idea, I said! I love curses. And I love that time-travel thing where you caused something in another time period and now you have to go back and undo what you did—which wouldn’t have happened if you hadn’t gone, so you’d think all you have to do is not go. But time travel just doesn’t work that way. Which is great! It’s a lot more mind-bending when it’s all tangled up.
I had a lot of fun rewriting with the curse and the friends and the psychic shenanigans. And of course the love interest. Guess what I named him? Only one choice there.
And then I had even more fun finding a girl with pink hair and some kids who could levitate and making the CURSEBUSTERS! Trailer. My characters came to life before my eyes! Want to see? Check it out:
http://www.youtube.com/watch?v=i7FmSPElyak
Thank you for this "behind the scenes" look at the making of Cursebusters!, Julie!
It does sound incredibly mind-bending!
You can find Julie on her website, her blog, or twitter.
Giveaway

Julie has graciously provided Lost For Words with a copy of Cursebusters! for giveaway.
I ended up getting two copies of the book sent to me, so this is a giveaway for one of those copies.
Many thanks, Julie!
Giveaway is open to US/Canada only. (Sorry to those of you who are international.)
Giveaway will end on June 16, 2011.
Please fill out this FORM to enter. Comments, while appreciated, will not be counted as entries.
Thank you!!
Posted by Corrine at 3:00 PM