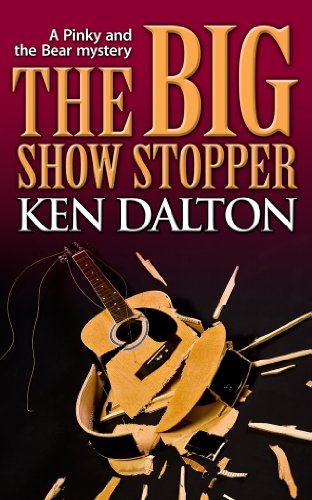 The Big Show Stopper opens in a packed concert arena with everyone waiting for the entrance of Brady Blackstone, the richest, and premier concert performer in America. But before Brady sets his foot on the stage, a tragic accident takes his life in front of Bear and a devastated Flo. However, it does not take Bear and Flo very long to question if the death was it an accident or murder?
Once again, in the pursuit of a pile of money and a little justice, Pinky travels to an exotic site while Bear and Flo end up in one of the least desirable locations in California.
The Big Show Stopper brings back Pinky, Bear, Flo, along with a gaggle of quirky characters. A beer swilling wacko. A naked old fart. A couple of downright dangerous folks. And concludes on a dark night with the dynamic trio spread eagle counting down the final seconds of their lives.
(Synopsis taken from goodreads.)
Title: The Big Show Stopper
Author: Ken Dalton
Genre: Adult Fiction, Mystery
Publisher: Different Drummer Press
Publication Date: September 16, 2010
Format: Softcover
Source: Received as part of the Tribute Books blog tour. Many thanks goes to Nicole for sending me a copy of this book for review. I received this book free of charge in exchange for an honest review.
Look for it: Amazon, Kindle Edition.
My rating: 3.5/5
Bear and Flo are heading out to a concert, and they've managed to obtain backstage passes. Before the show starts though, it is stopped in its tracks when the main attraction winds up dead. Was Blackstone's death accidental, or intentional? Bear and Pinky are on the case when they are asked to investigate Blackstone's death by his widow. With Flo in tow, Bear heads to Carson City to question Blackstone's crew. Pinky is left to handle any problems that arise back at the office. Will they find the bad guy?
The Big Show Stopper has a very noir-like vibe to it. It's set up as a true who-dun-it and the reader will be wondering until the very end if Bear and Pinky will solve the mystery. With an engaging and colourful cast of characters, there is no end to the witticisms. A trigger-happy cop, Bear's girlfriend, Flo, a homeless man, and Blackstone's crew all add their own brand of flair to the story.
Bear and Pinky test the bonds of employee and employer, and the book is told from both of their points of view. They both seem to know when to give and have a relatively good working relationship, though I think Bear is treated poorly by Pinky on more than one occasion. Bear and Flo's relationship is also up for debate as Flo constantly is questioning Bear's whereabouts. While readingThe Big Show Stopper I found that it reminded me of a masculine version of Janet Evanovich's Stephanie Plum series. The main reason that I drew the connection was due to the relationships that Bear has with his fellow co-workers and family, as well as the characters that he has to hunt down and question. There are many situations in the book that are inflected with humour which makes this book an interesting read.
All in all, an engaging storyline. The reader will be invested in the outcome, and will enjoy the behind the scenes look at different aspects of the music industry. A humorous and, at times, tongue-in-cheek read, avid mystery readers will like the nuances of the characters and story as Bear struggles to piece together the mystery of Blackstone's death on a deadline.
Posted by Corrine at 6:00 AM

Thanks Corrine for the review and for participating in the book's blog tour.

This doesn't really sound like my normal read, but I loved your review for it! Great thoughts, Corrine :)