Two authors are going to be in the Toronto area within the next two weeks, and if you are looking for events to go to, look no further! The first event is with Alice Hoffman, the author of the newly released The Dovekeepers. I am currently reading this book right now, and even though I'm just starting it, it has captured my attention! The second event is with Canadian author, Jennifer Hillier. She is the author of Creep, an adult fiction thriller. It sounds fantastic as well! 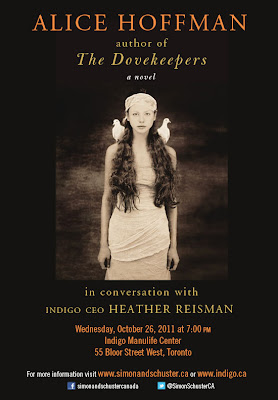 The Dovekeepers synopsis courtesy of goodreads.


Over five years in the writing, Alice Hoffman’s most ambitious and mesmerizing novel ever, a triumph of imagination and research set in ancient Israel.
The author of such iconic bestsellers as Illumination Night, Practical Magic, Fortune’s Daughter, and Oprah’s Book Club selection Here on Earth, Alice Hoffman is one of the most popular and memorable writers of her generation. Now, in The Dovekeepers, Hoffman delivers her most masterful work yet—one that draws on her passion for mythology, magic, and archaeology and her inimitable understanding of women.
In 70 CE, nine hundred Jews held out for months against armies of Romans on a mountain in the Judean desert, Masada. According to the ancient historian Josephus, two women and five children survived. Based on this tragic historical event, Hoffman weaves a spellbinding tale of four extraordinary, bold, resourceful, and sensuous women, each of whom has come to Masada by a different path. Yael’s mother died in childbirth, and her father never forgave her for that death. Revka, a village baker’s wife, watched the horrifically brutal murder of her daughter by Roman soldiers; she brings to Masada her twin grandsons, rendered mute by their own witness. Aziza is a warrior’s daughter, raised as a boy, a fearless rider and expert marksman, who finds passion with another soldier. Shirah is wise in the ways of ancient magic and medicine, a woman with uncanny insight and power. The lives of these four complex and fiercely independent women intersect in the desperate days of the siege, as the Romans draw near. All are dovekeepers, and all are also keeping secrets—about who they are, where they come from, who fathered them, and whom they love.
This novel is Alice Hoffman’s masterpiece. 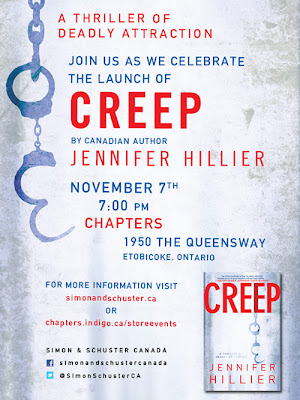 Creep synopsis courtesy of goodreads.
Pulsing with the dark obsession of Radiohead’s song “Creep,” this taut thriller—Jennifer Hillier’s superb debut—rockets from its seductive opening to a heartpounding climax not easily forgotten.
If he can’t have her . . .
Dr. Sheila Tao is a professor of psychology. An expert in human behavior. And when she began an affair with sexy, charming graduate student Ethan Wolfe, she knew she was playing with fire. Consumed by lust when they were together, riddled with guilt when they weren’t, she knows the three-month fling with her teaching assistant has to end. After all, she’s finally engaged to a kind and loving investment banker who adores her, and she’s taking control of her life. But when she attempts to end the affair, Ethan Wolfe won’t let her walk away.
. . . no one else can.
Ethan has plans for Sheila, plans that involve posting a sex video that would surely get her fired and destroy her prestigious career. Plans to make her pay for rejecting him. And as she attempts to counter his every threatening move without her colleagues or her fiancé discovering her most intimate secrets, a shattering crime rocks Puget Sound State University: a female student, a star athlete, is found stabbed to death. Someone is raising the stakes of violence, sex, and blackmail . . . and before she knows it, Sheila is caught in a terrifying cat-and-mouse game with the lover she couldn’t resist—who is now the monster who won’t let her go.
Posted by Corrine at 3:15 PM

Sooo jealous. I'm a big Alice Hoffman fan and would love to go to an author event with her. Are you going? If so, I'll be looking forward to reading your write up of it!

Unfortunately, I won't be going because I work that night. It should be a blast though for everyone who does go though! =) Too bad you can't go either.